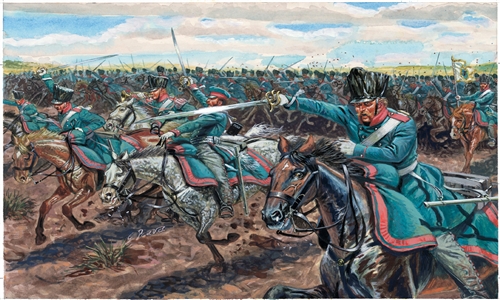 On October 16th, 1813, general Yorck led his Prussian Dragoons in a desperate charge against the positions defended by Marshal Marmont's French troops during the assault of Mockern, a village near Leipzig. It's one of the main phases of the famous “battle of the nations” that radically changed the alliances and boundaries in Napoleonic Europe. The Prussian light horsemen are represented with their headgear protected by oilcloth, as customarily worn during military campaigns