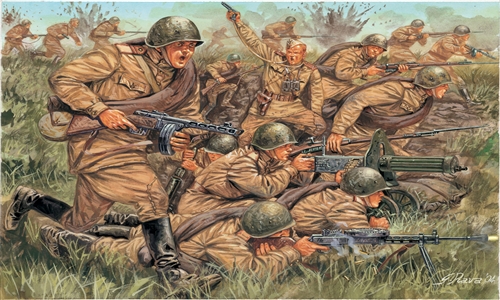 During World War II, the Red Army counted more than 11 millions of men including troopers, NCOs and officers. The huge mobilization ordered by Stalin as a reaction to the German invasion in June 1941 (Operation Barbarossa) made of the Red Army the largest army in history. The models in this kit are represented with the characteristic individual equipment of the Soviet trooper: the already obsolete Mosin-Nagant rifles, the Svt-40 semiautomatic rifles, and the P.P.Sh submachineguns with drum magazine.