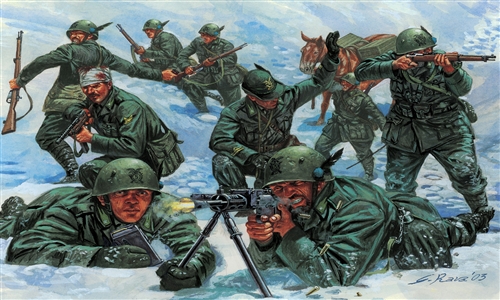 During World War II, Alpini divisions where used on several fronts. In 1942 the Italian expeditionary force was sent on the Russian front to support the Wehrmacht. It included the Alpini Julia, Tridentina and Cuneense divisions. The Italian Alpini took active part at the defense of the Don front but they were outnumbered and surrounded by the troops of the Red Army. The Alpini divisions were forced to retreat with a long and heroic march, in dire conditions, through the cold wastes of the Russian steppe. During the retreat they were also engaged in tough clashes. The most famous is the battle of Nikolajewka that took place on January1943