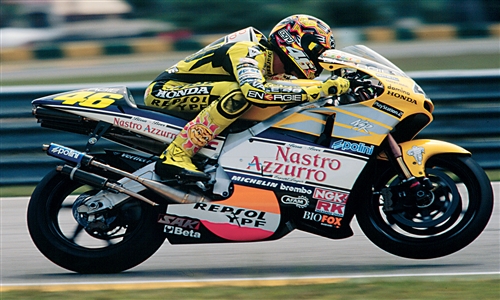 The Honda NSR 500 Nastro Azzurro 2001 year model has been used by Valentino Rossi and is the last evolution of the Mick Doohan machine. The The 2001 version has been deeply developed also thanks to Valentino Rossi suggestion that worked hard to set up the machine. HRC full revised the chassis and the cowling as well the airbox, the radiators and the seat. Many engine parts have been modified to increase the performance in terms of max power and delivery. With this machine Valentino Rossi won the 2001 World Championship title in the 500 c.c. class and has allowed Honda to reach 500 victories in the Grand Prix.