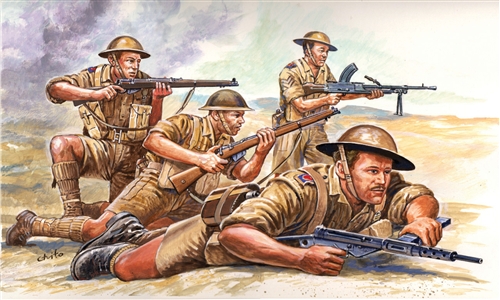 In August 1942, after the British army was defeated in Northern Africa by the troops of the German-Italian Axis, Winston Churchill replaced General Auchinleck with General Montgomery. General Bernard Law Montgomery soon counterattacked with the 8th army. He was the strategist of the battle of El-Alamein in Egypt, that ended with the defeat of the German-Italian forces led by General Erwin Rommel. The soldiers in this kit are represented with the traditional tropical uniform and are equipped with Lee Enfield rifles, Sten submachineguns and Bren machineguns.