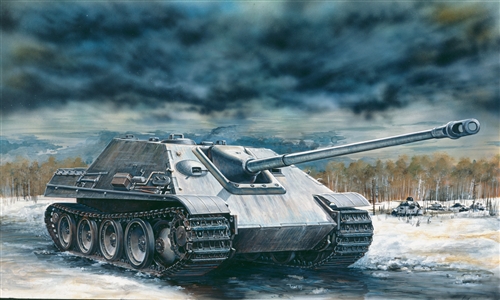 The Jagdpanther is the tank destroyer version with a fixed gun based on the Panther G variant which has been known as one of the best tanks of World War II. This version with its characteristics of a compact and ballistically advantageous shape was equipped with a remarkable 88mm gun which was able to penetrate all allied tanks, included the well-protected Soviet Stalin Is and IIs. This vehicle went into production in 1944, and because of intensive allied bombing raids against Germany industry only reached the frontlines in limited numbers and thus had no impact on the war efforts.