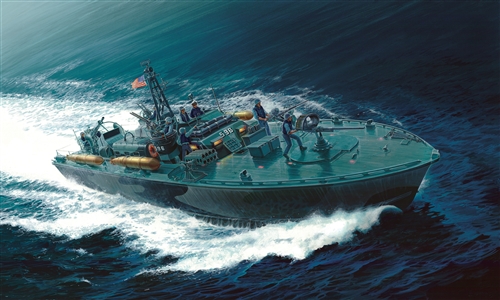 During the Second World War the U.S. Navy deployed a large amount of three types of motor torpedo boats: the Higgins measuring 78 feet and ELCO measuring 77 and 80 feet. Every model could be distinguished from the others, apart from by length, by configuration, weapons and various other details. The 80 foot ELCOs represented the most numerous class: they were realised in five series, for a total of about 300 examples Built in mahogany and pushed by three 1,350cv Packard 4M-2500 engines (taken to 1,500 in the latest series), these vessels easily exceeded 40 knots. The equipment and weapons were constantly updated and improved thanks to experience acquired in the field and the progressive change of role: with the progress of the conflict, in fact, the PT Boats left the original task of attacking and cutting off the traffic, taking on the role of gunships and operating in the proximity of the coast or in channels. The Italeri model reproduces the PT 596 and an 80-foot ELCO from the last batch produced.