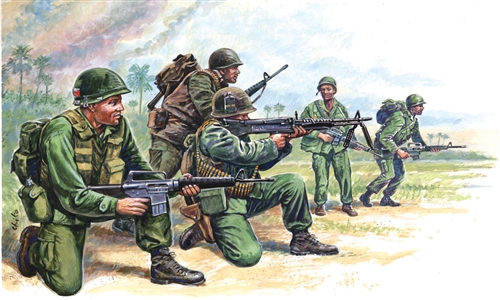 On the eve of the Tet Offensive (January 1968), U.S. Forces counted more than 330.000 soldiers and 78.000 Marines in Vietnam. The Marines units and the 1st Cavalry division were composed of prepared, reliable and determined soldiers. This kist shows the typical formation of an American infantry unit. Soldiers are equipped with an M16 assault rifle and with the 7,62mm M60 machinegun. During the Vietnam War, special forces units better known as Green Berets were employed, too.