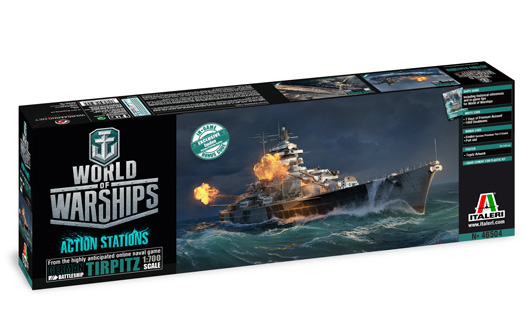 Tirpitz was the sister ship of the famous German battleship Bismarck and named after Grand Admiral Alfred von Tirpitz. It was laid down at the Kriegsmarinewerft Wilhelmshaven in November 1936. The works were completed by February 1941, and after a series of wartime modifications, the vessel become heavier than Bismarck. Thus, Tirpitz became the heaviest battleship built by a European navy.

After the sea trials, Tirpitz joined a flotilla in the Baltic Sea. The mission was to prevent the possible break-out of the soviet fleet based at Leningrad. Shortly after, the battleship was unsuccessfully attacked by the Royal Air Force in its home port of Kiel. It became obvious that it needed to be moved. In November 1941, Tirpitz was sent to the fjords of Norway to act as a “fleet in being”. Its task was to engage and disrupt convoys sent to help the Soviet Union. For this assignment, a better anti-aircraft defence and two quadruple 53.3cm torpedo tube mounts were installed.

Camouflaged and protected by a battery of anti-aircraft guns and smoke generators, Tirpitz was stationed in Fættenfjord, north of Trondheim. Due to several factors, including fuel shortages, it was rarely sent out on missions. However, its presence in the area of operations was a serious threat to Allied forces — even the rumour of a prowling Tirpitz had dramatic consequences, as exemplified by the tragic story of Convoy PQ 17. Suspecting an imminent attack by Tirpitz, the convoy was scattered as a defensive measure against the battleship. As a result, individual merchant ships were easy prey for U-boats and the Luftwaffe: 24 out of the 35 ships forming Convoy PQ 17 were destroyed.

This event convinced the British Admiralty that Tirpitz needed to be neutralised in order to ensure undisturbed convoy operations. Several plans were developed and attempted, but the majority of them ended in total failure. The battleship remained operational until mid-1944, which is when it came under a successful attack from RAF Lancaster bombers. Six-ton Tallboy bombs were used, and one of them struck the bow of the ship. The bomb penetrated the armour, exited the keel and exploded below the ship, causing enough damage to render Tirpitz unseaworthy. The ship remained afloat and was used as a floating gun battery after being moved to Håkøya Island, outside Tromsø. On October 29th, a second attack was performed by 32 bombers, but they were unable to hit the battleship. A third and final attack was performed on November 12th, 1944. The RAF managed to hit Tirpitz with two bombs, and not even the sandbank could prevent it from sinking.