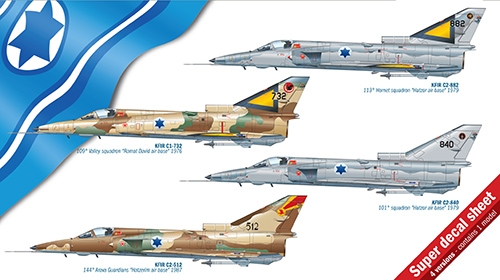 The actual first version built off of these plans was called the Nesher (Eagle) and built totally in Israel. The biggest difference in the design was the modification to accommodate the General Electric J79 turbojet the same engine used in the F-4 Phantom. This more advanced power plant gave the aircraft far better performance than the older Mirage III. After numerous revisions and improvements, the Kfir, which translates “Lion Cub” in Hebrew, finally entered service in 1975. Its role as the primary air superiority aircraft of the Israeli Air Force was very short however. In 1976 Israel started to take delivery of F-15 Eagles from the United States. They were used more for ground attack missions throughout their service life until 1990s when they were withdrawn from active duty.