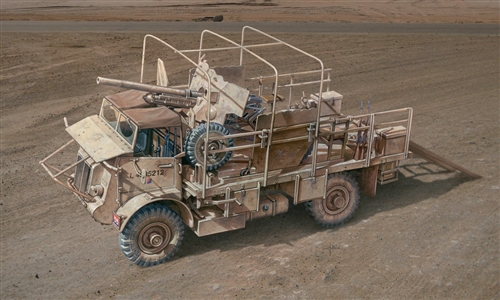 In 1939 the British War Office placed an order with VAUXHALL MOTORS Ltd of Luton, a British subsidiary of General Motors to design a 3-ton 4x4 truck chassis which would form the basis for various vehicles. Originally this vehicle was built for the transport of 6-pound-guns type M-1 and therefore it was also called Gun-Portee. The gun was placed on the platform of the truck and thus it could not be identified. Thus the Bedford QL truck was created and from 1941 until 1945 a total of 52,245 chassis were produced. The QL was an excellent vehicle and soon became the most numerous tactical 3-tonner of the British armed forces. These models were used on almost all fronts during the Second World War and later served in Korea and the Middle East. In the British forces it was gradually replaced by the model RL.